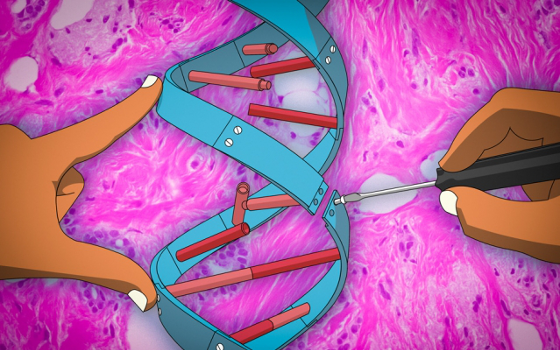 The spread of malignant cells around the body, known as metastasis, is the leading cause of mortality in women with breast cancer. Now, a new gene therapy technique being developed by researchers at MIT is showing promise as a way to prevent breast cancer tumors from metastasizing. The treatment, described in a paper published today in the journal Nature Communications, uses microRNAs - small noncoding RNA molecules that regulate gene expression - to control metastasis.

The therapy could be used alongside chemotherapy to treat early-stage breast cancer tumors before they spread, according to Natalie Artzi, a principal research scientist at MIT’s Institute for Medical Engineering and Science (IMES) and an assistant professor of medicine at Brigham and Women’s Hospital, who led the research in collaboration with Noam Shomron, an assistant professor on the faculty of medicine at Tel-Aviv University in Israel.

"The idea is that if the cancer is diagnosed early enough, then in addition to treating the primary tumor [with chemotherapy], one could also treat with specific microRNAs, in order to prevent the spread of cancer cells that cause metastasis," Artzi says.

The regulation of gene expression by microRNAs is known to be important in preventing the spread of cancer cells. Recent studies by the Shomron team in Tel-Aviv have shown that disruption of this regulation, for example by genetic variants known as single nucleotide polymorphisms (SNPs), can have a significant impact on gene expression levels and lead to an increase in the risk of cancer.

To identify the specific microRNAs that play a role in breast cancer progression and could therefore potentially be used to suppress metastasis, the research teams first carried out an extensive bioinformatics analysis.

They compared three datasets: one for known SNPs; a second for sites at which microRNAs bind to the genome; and a third for breast cancer-related genes known to be associated with the movement of cells.

This analysis revealed a variant, or SNP, known as rs1071738, which influences metastasis. They found that this SNP disrupts binding of two microRNAs, miR-96 and miR-182. This disruption in turn prevents the two microRNAs from controlling the expression of a protein called Palladin.

Previous research has shown that Palladin plays a key role in the migration of breast cancer cells, and their subsequent invasion of otherwise healthy organs.

When the researchers carried out in vitro experiments in cells, they found that applying miR-96 and miR-182 decreased the expression of Palladin levels, in turn reducing the ability of breast cancer cells to migrate and invade other tissue.

"Previous research had discussed the role of Palladin in controlling migration and invasion (of cancer cells), but no one had tried to use microRNAs to silence those specific targets and prevent metastasis," Artzi says. "In this way we were able to pinpoint the critical role of these microRNAs in stopping the spread of breast cancer."

The researchers then developed a method to deliver engineered microRNAs to breast cancer tumors. They embedded nanoparticles containing the microRNAs into a hydrogel scaffold, which they then implanted into mice.

They found that this allowed efficient and precise delivery of the microRNAs to a target breast cancer tumor site. The treatment resulted in a dramatic reduction in breast cancer metastasis, says Artzi.

"We can locally change the cells in order to prevent metastasis from occurring," she says.

To increase the effectiveness of the treatment even further, the researchers then added the chemotherapy drug cisplatin to the nanoparticles. This led to a significant reduction in both the growth of the primary tumor, and its metastasis.

"We believe local delivery is much more effective (than systemic treatment), because it gives us a much higher effective dose of the cargo, in this case the two microRNAs and the cisplatin," she says.

"The research offers the potential for combined experimental therapeutics with traditional chemotherapy in cancer metastasis," says Julie Teruya-Feldstein, a professor of pathology at Mount Sinai Hospital in New York, who was not involved in the study.

"We are very excited about the results so far, and the efficacy seems to be really good. So the next step will be to move on to larger models and then to clinical trials, although there is still a long way to go," Artzi says.

Novartis has signed an initial agreement with Roche to reserve capacity and implement the technology transfer for the production of the active pharmaceutical ingredient (...

Pfizer Inc. (NYSE: PFE) announced today that it has acquired Amplyx Pharmaceuticals, Inc., a privately-held company dedicated to the development of therapies for debilita...

Moderna, Inc. (Nasdaq: MRNA), a biotechnology company pioneering messenger RNA (mRNA) therapeutics and vaccines, announced that the World Health Organization (WHO) has is...

Sanofi has entered into an agreement with Moderna, under which Sanofi will help manufacture Moderna's COVID-19 vaccine, supporting the COVID-19 pandemic and vaccine suppl...

Valneva SE, a specialty vaccine company focused on the development and commercialization of prophylactic vaccines for infectious diseases with significant unmet medical n...

A year into the COVID-19 pandemic, mass vaccinations have begun to raise the tantalizing prospect of herd immunity that eventually curtails or halts the spread of SARS-Co...

Pfizer and BioNTech to supply the European Union w…

Pfizer Inc. (NYSE: PFE) and BioNTech SE (Nasdaq: BNTX) announced they will supply an additional 100 million doses of COMIRNATY®, the companies' COVID-19 vaccine, to the 2...

Even though more and more vaccines against the coronavirus are being administered all over the world, many countries are still battling with outbreaks and face difficulti...

Patients who are obese or overweight are at risk f…

COVID-19 patients who are overweight or obese are more likely to develop a more severe infection than patients of healthy weight, and they require oxygen and invasive mec...

Several weeks following the publication of the large real-world COVID-19 vaccine effectiveness study by the Clalit Research Institute in Collaboration with Harvard Univer...

The most complete picture yet is coming into focus of how antibodies produced in people who effectively fight off SARS-CoV-2 work to neutralize the part of the virus resp...